Clara Morera, as a very free artist who faces everything

Yes, for better or for worse it is the same story. I don’t think I would like to change it.

2- I stop before your piece Put your hand here, Macorina… First I smile and then I ask to myself: Holy women or holy women in your work?

The Macorinas are three, it was a very personal series that served as an exorcism against recurring situations in my career, destructive I could say. The only holy woman there was me because I was strong. The Macorinas were an egbo, a cleansing and a reaffirmation of myself. Laughter was also part of that exorcism. The Macorinas have a great history. They are now in the Shelley and Donald Rubin collection. That was also part of the exorcism. That series made me happy.

3- The expression of the gesture, the sense of humor, the attitude of the verb through the represented bodies, as well as the costumes and signs used in most of your works suggest a visual representation of the iconography of the Afro-Caribbean religion. Why the selection of this theme? Do you always include these symbols in your work?

No, not always. The Macorinas, for example, do not use symbols of Afro-Antillean religions. The influence of black culture imagery, as it is called, grew out of a very interesting movement of the seventies and eighties, where a number of artists, musicians, dancers and writers of my generation began to rediscover what until then was considered folklore, saving Lam and some others who had gone to Paris and therefore were not open to criticism. In my case the charm was in penetrating those beautiful symbols and mythologies and bringing them into a modern language. Not that I did it very deliberately, just my mind and my technique is not conventional, therefore it is almost impossible that my work has something conventional. The language and materials also broke squares and “deja vu”. The years that I worked making monumental tapestry and soft sculptures helped me to break formal barriers such as respect for a frame, for example. That’s where my banners came from. In the Afro-Cuban culture there were some flags that the slaves had managed to bring.

4- Have you ever thought about a specific topic (another) for your work and you still haven’t materialized it?

No, I am not tied to that topic. In Canada I was at a congress of The Young Painting of Canada, which was a tribute to the Anniversary of Discovery. It was called Tierra Tierra, meeting of Two Worlds, I went with a series about the conquest, nothing to do with the Antilles. I am also interested in Hindu and Tibetan mythology and have worked using those themes. I don’t save for later, if I’m interested in something, I’ll do it and that’s it.

5- Looking at the past with eyes that I borrow, it never hurts. What was good and bad for the circumstances of Cuban art made by women in Cuba in the 1970s?

Maybe it was difficult, especially for women of my generation. We were not in any way attached to the previous generation, but we were not part of the “new hope” either. Sarita Gómez brilliantly named it “The Generation of the Experiment”. That we were. It was not an experience of women in art, it was an experience of a very rebellious and analytical generation in art. On the other hand, I have never been a feminist, but neither have I been a “female”. I consider myself equal to men in what I can, if I need someone strong to help me with something, I don’t mind asking them for the favor but I don’t mind if they don’t give me their hand to get out of a car and stuff. We are different but like the same and we differ in some things. That’s fine. I do not tolerate machismo (nor “feminism”, call it feminism or vindication of sex, etc.). I was never discriminated against in Cuba for being a woman artist, however I have friends, including an art specialist, who were.

6- At times, it seems that your work screams carefree not in search of understanding but of contemplation and expression. What would you call the process of representation of the idea transformed into art?

I believe that art is not to understand. Books are to understand, perhaps movies have to be understood to enjoy them. With the visual arts as with music there is no possible understanding. I cannot understand a concert, I can experience an emotional state that hearing that music produces in me. With painting, sculpture and other visual arts it is the same, how can I understand them? I cannot understand Carmen Herrera, I can enjoy her, I can identify with her work that possibly speaks to me differently than to another person. Our perception will always be ours and not equal to any other. That is why the relationship of the work of art with the person who contemplates it is always unique.

7- How would you describe the current scene of Cuban art in New York?

Which one? The Cubans of the Island or the Cuban-Americans? There are those who insist on believing that artists differ by where they live. Some institutions and collectors had the idea that the artists who live in New York are not Cubans, but Americans. Following that same reasoning, we would say that Wifredo Lam, Cárdenas, Diago, to name a few, are French and not Cuban. Luckily for me, I have never met those kinds of people, but there are, in New York.

8- Do you have a preference for some specific spaces to exhibit and / or represent your work in NY?

El Piso Ocho was a very interesting experimental space, where, in general, the works were already part of Rubin’s private collection, but where the Cuban curators did a great curated work, inclusive, and with a broad modern sense. I like museums and universities, institutions, some private galleries and alternative spaces like Avenue B and the Bronx where there is a cultural diversity that makes group exhibitions very refreshing and surprising.

9- Tell us about your most recent exhibition.

The curator and artist Alexis Mendoza proposed an exhibition only for the Salena Gallery, Long Island University, Queens, and in March of this year we did it. The artist Bernardo Navarro helped me a lot with the selection and conservation of the work. These two artists are like the allies of Castañeda’s books, I could always count on them. The gallery is very large and very beautiful and my works seemed to have been made for those circular walls. I exhibited different techniques and formats, especially the large banners where I feel very free. I had a chat with the university students who identify a lot with the exhibition. A documentary was made of the exhibition that is going to be presented to alternative cinema in NYC.

10- How would you like to be remembered in the professional / artistic field?
As a very free artist who faces everything. 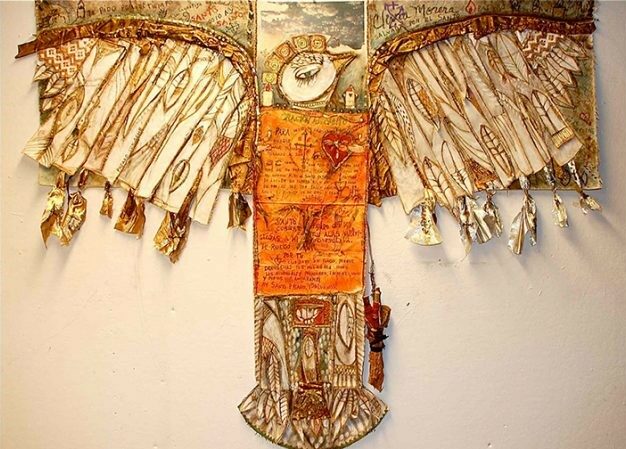