While the restlessness lasts

While Inti was peeling Dutch potatoes to make a Spanish omelet for her daughter, I lessened the cold with a cup of hot coffee. We talked about his professional career, the scenarios, circumstances and fields of action around it.

1- Discussing the beginnings is always an interesting anecdotal resource. When did Inti Hernández become interested in the art world?

From a very young age I preferred a plasticine ball to bat and the ball of our national sport. I always had a good time doing something with my hands and it didn’t take long for me to realize that what I was doing attracted the attention of others as well. Once I was eleven years old, my mother took me to do the recruitment tests for the Olga Alonso elementary school of art in Santa Clara and from my enrollment in that institution to date, everything I have done (and will do) is related to the world of visual arts.

2- You begin to develop your career as a visual artist in the context of a “different” and no less controversial generation (the 90s) within the development of the Cuban art scene. Do you feel that being part of or coinciding with / with said generation formally – conceptually influences your work?

I don’t know if we can say that I am part of the 90’s generation. Los Carpinteros, Carlos Garaicoa, Esterio Segura and Sandra Ramos were already (although very young) established artists. I had just started at the Higher Institute of Art when that generation was already traveling the world. Let us remember that we started at the ISA in 1995, and that it was not until the VII Biennial of Havana with the DUPP Gallery and its UNESCO Prize for the Arts in 2000, that the work we had been doing collectively and individually began to be appreciated by the general public and studied in circles with notice in art.
When we analyze the precepts that somehow unify the values defended by the generation of the 90s in Cuba, I can see that that’s where I come from: the taste for good manners, the use of materials and techniques established in the history of art and thinking the work, although intelligent and sophisticated, also as an authentic and mercantile firm. But when I follow the development of my work from Galería DUPP to date, I notice that there is something different that questions the very nature of the work.
In pieces like Descenso (my work for the DUPP project entitled La Época); where the public is an indissoluble part of the work and somehow completes it or when we see that in the work Encuentros (ice cubes) (the work of the ice cubes of the ‘friend’ and the ‘enemy’) we cannot define what is the work: if it is the ice cubes that shape the ice cubes or it is the act of sharing them in the drinks of a “public”, which is not necessarily there to consume art, we see that art as a result plays to expand the notion of authorship and with it also the nature and role played by the receiver when it comes to consuming and unraveling the work.
This, in my modest understanding, is not what comes to mind when we think of the ‘90s generation’, but I do not know to what other movement of contemporary Cuban arts we could make what I do belong. Perhaps it is simply not relevant to pigeonhole it at a time or a space. In this way it can continue to be transparent in its development and making us believe that as long as the ‘restlessness’ lasts and the desire is full and honest to satisfy it, it is that I do something that belongs to the ‘here’ and the ‘now’.

3- Between 2005-2006 you obtained a scholarship to study in the Netherlands from the Rijksakademie van beeldende kunsten / Dutch Ministry of Education, Culture and Sciences. Tell us about that experience.

The Rijksakademie, although it speaks of ‘academies’ in its title is not a school, it is a residency program for young international artists based in Amsterdam. It was a luxury to be among the select group of lucky people and to have the unconditional support of that institution and its sponsors. Thus I was able to concentrate my strength and continue developing my work for a period of two years. Although with a too monasterial tone for my taste, this institution was the open door that allowed me to enter the world of art in Holland and make known what I do in the country where I live most of the year.

4- Your personal / professional life unfolds between two countries: Holland and Cuba. Both scenarios influence the realization of artistic projects from different perspectives. How do you handle this situation from a creative, executive, commercial and promotional point of view?

There are many things in this question. Let me just mention that from my “dual nationality” I try to learn and apprehend the best. Holland has given me the logical and practical training to understand how many stars have to align so that we can go from an initial idea to a result. The Netherlands is the context of ‘the agenda’ and of respect for it, not only their own but also that of others. Cuba is the context of improvisation, it is the context that is in my life to remind me that I am here and now and that life is good because it is curious and because it is always open and ready to adapt to whatever has to happen.

5- There is in your work a subtle suggestion about the collective memory, the permanence, the ambiguity of the object depending on its circumstances, the same object that represents ways of life and behaviors. You subtract elements (tangible and intangible) that make up the Cuban identity and articulate them in space with a personal discourse, but with a collective impact. How do you describe the process in which you begin to conceive a project, from the beginning to the end?

Everything is organized in relation to the ‘common sense of things’. My works do not demand from a public advised in art, it only has to be sensitive and willing. To fully respond to these premises, the process of making the work selects the medium, the context, the scale and the materials in such a way that the vision that inspires it is embodied in a result that has been designed based on communication. and if possible the dialogue with the other. I have always believed that if an idea becomes a ‘conversation’ we are in the presence of something that is already undeniable (to quote Jorge Luis Borges): “undeniable like stones and trees”.

6- As part of the material resources that you use to create the pieces, wood predominates, which I dare to mention that you master perfectly. Do you have a specific reason why you repeatedly select such material?

Wood is a noble material. Through time it has accompanied the human being and has allowed with its sustainable insistence and its versatility that it is discovering its potential and expressing the vision that shapes and inspires it. It was wood that witnessed the passage to the Bronze Age and has been with us from the beginning of the industrial revolution to the present day. It is also wood that accompanies us at home, in the most intimate contexts. That endearing, every day, organic, almost intimate condition helps me to confirm the tone that I have always wanted in the work I do. A work that, although sometimes it turns its gaze to the drama of life, does so from a tenderness and the fundamental desire to achieve a pact.

7- Your work acquires, in some projects, a multifunctional and interdisciplinary character. It can be implemented / exhibited the same in closed spaces as in open or public spaces such as squares, parks, walks and avenues; and in its execution you link aspects related to science such as mechanics, mathematics, physics. The Meeting Places project exemplifies the above statement. How do you relate artistic and scientific aspects in the search and establishment of a space for communication between individuals?

A work interested in visiting and activating extra-artistic contexts is a work that must always be open to other knowledge. When you want to build an Outdoor Classroom, you have to open doors to other disciplines such as architecture, engineering and knowledge of the construction materials industry. I am following ‘the vision’ and if it is demanding knowledge that I do not have in order to complete it, I have nothing left but to launch the invitation to join friends and people with the necessary knowledge. This is how artistic aspects are related to other extra-artistic ones. All based on a work as a space for communication and dialogue between people.

8- Your professional career is inserted within a set of platforms that promote the development of contemporary art, such as fairs, biennials, competitions, among others. How important is these events for the circulation / promotion of an artist’s work?

“To exist is to be perceived.” This I heard him say many times about my dear friend and always professor René Francisco. Any promotion and dissemination channel that is offered or available must be an explored channel. Life is still a surprise and we never know where the hare will jump. That is why you have to collaborate with everything that in some way has managed to prove that it is correct and that to be it does not make irresponsible abuse of power in others. If we see that this premise is guaranteed then we must do as our José Martí used to say: “To be art among the arts and in the mountains, to be mountains.”

9- The “Cotidiana” exhibition was recently inaugurated at Galerie Ron Mandos, Amsterdam. When and how did the idea of holding this show come about? Why the title “Everyday”?

The word ‘everyday’ speaks of something that insists on time, something that becomes a ritual that accompanies us daily. But it is not something routine and by far it does not have to be something repetitive or boring. There is something homely and intimate in that word and also fundamental and powerful that has always drawn me. Now, that almost tender tone is the best mediator to talk about unresolved things that insist, about things that are not here to do good and that have to be changed from the knowledge and conviction of those who live and suffer them. For example, the lack of balance between collective interests and individual interests, present in the series of works, Balance Cubano or the notion of inequality in our societies, present in the video installation At the head of the table people sit, they form part of the drama that this exhibition tries to illustrate; where these and other issues of today’s societies are addressed with works fundamentally resolved in wood and that jointly propose to recreate the environment of a home, of that intimate context that is here to remind us how close all these issues are pending review , of solution or improvement. 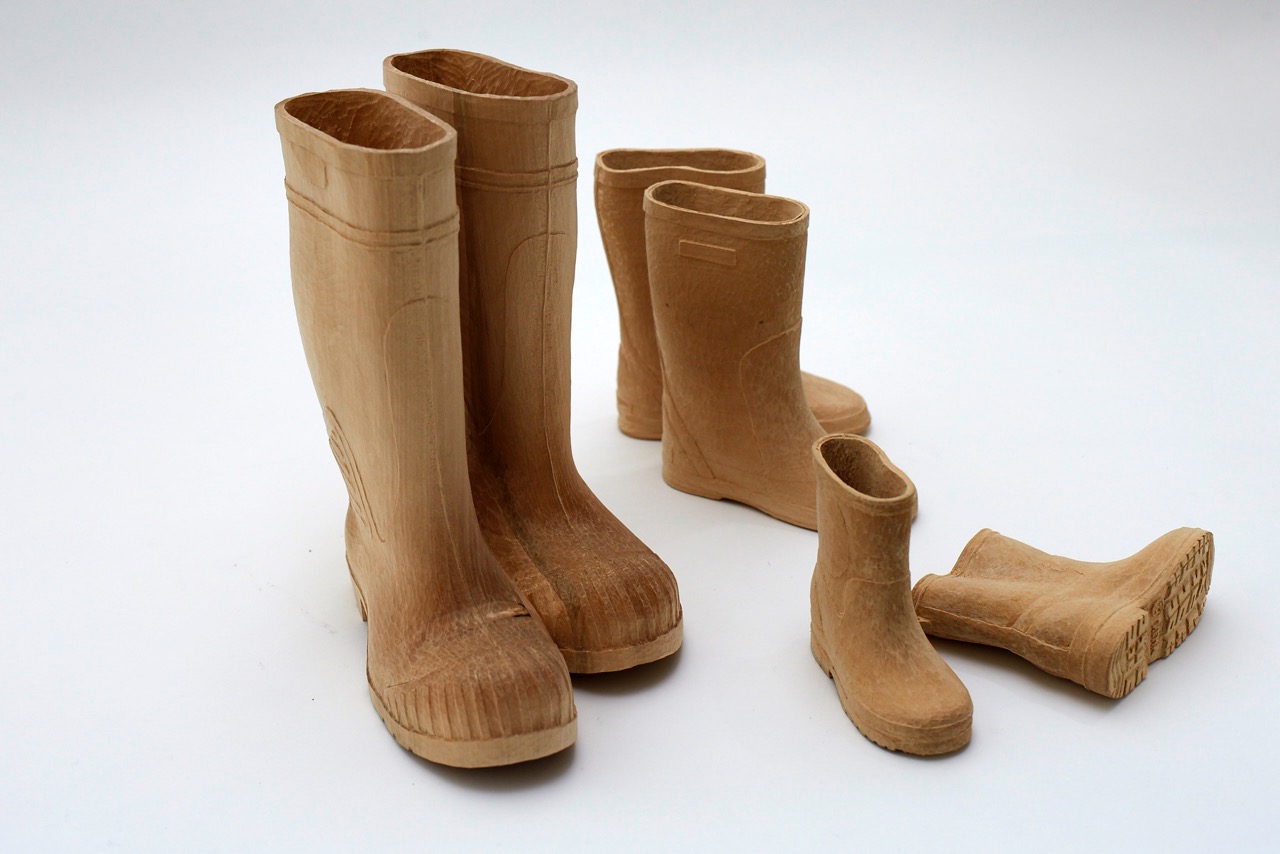